Here's a wonderful article from Time Healthland Ezine revealing how the brain loses consciousness. It looks like the brain functions as a whole or a cluster of relationships and that consciousness is a product of the whole rather than residing in one place like a seat of consciousness - which sits nicely in a holistic model of consciousness being an outcome of cell communication. Read on... 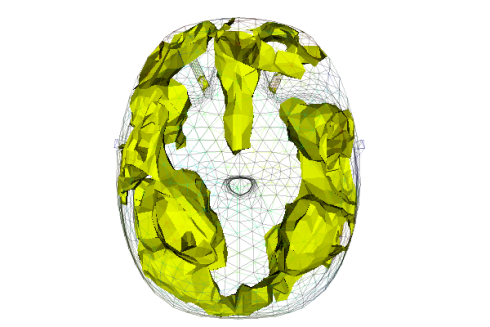 "What happens to your brain as it slips into unconsciousness? A new technique allows researchers to view real-time 3-D images of a patient undergoing anesthesia using the drug propofol, and the findings show that consciousness isn’t suddenly switched off, but rather fades as though a dimmer is being dialed down.

The research also suggests that consciousness resides in the connections between multiple parts of the brain, not in any single region. The images show that changes in the anesthetized brain start in the midbrain, where certain receptors for a neurotransmitter called GABA are plentiful.

Drugs like propofol act on these GABA A receptors, mimicking and enhancing the effects of GABA, which inhibits cellular activity. From the midbrain, changes move outward to affect the whole brain; as propofol’s message spreads from region to region, consciousness dissolves.

“Our jaws ricocheted off the ground, and I won’t say the words we used when we first saw the video,” says lead author Dr. Brian Pollard, professor of anesthesia at the University of Manchester, who presented the results at the European Anesthesiology Conference in Amsterdam on Saturday. “We just sat there and stared, dumbfounded and kept repeating it. We’re the first people in the world ever to see the brain becoming unconscious, that’s quite a sobering thought.”

Although anesthesia has been widely used since 1846, when a dentist first demonstrated the effects of ether at Massachusetts General Hospital, until recently very little has been understood about how it works. Even though scientists know that anesthetic drugs like propofol affect GABA in the brain, how that actually eliminates consciousness still remains a mystery.

Pollard explains, however, that propofol alters “the balance between inhibition and excitation in the brain,” shifting the balance of activity toward the inhibitory circuits. At first, this produces a paradoxical result.

“When inhibition is inhibited, you first move into a stage of excitation or mania,” he says, noting that this usually occurs too quickly to be observed with modern anesthesia. But the brief sense of euphoria that some people experience before losing consciousness from propofol may reflect this loss of inhibition (and may also account for Michael Jackson’s taste for the drug).

Click on the link below to view the animation of the brain:http://bcove.me/v2bo7o59

“You then begin to inhibit the excitation and the patient becomes more sedated and loses consciousness,” he says. That’s why in the video the brain appears to become more active while unconscious: it’s showing the increased action in inhibitory circuits.

“What we’ve got supports the idea that there are several levels [of consciousness] rather than [an on/off] switch,” he says.

Pollard’s group used a new technology called fEITER, for functional electrical impedance tomography by evoked response. To measure brain activity, the technique uses imperceptible electrical currents produced by electrodes placed on the head. Unlike fMRI, it doesn’t require the patient to be placed inside a magnetic field, which precludes the use of metal devices, so the laptop-size fEITER instrument could be used in an ordinary operating room.

“We can get lot of mileage [from fEITER in research] to separate out anesthesia, sedation and consciousness,” says Pollard. The device could also potentially be used to rapidly determine the site of a stroke or the extent of a brain injury.

“This is a great idea and I think it’s very exciting,” says Dr. Emery Brown, professor of computational neuroscience at MIT, but he cautions that since the research has not yet been published in a peer-reviewed journal, the results must be seen as preliminary. Still, he says that the research may offer “new insight into how anesthesia works.”

Ultimately, fEITER might be used to make sure that patients do not experience any consciousness during surgery. About 1 in 1,000 to 2,000 patients experiences some degree of consciousness under anesthesia, which can obviously be extremely traumatic. However, it’s difficult for doctors to determine when consciousness is occurring, because drugs used in surgery also paralyze the body and affect measures of stress like blood pressure. A better understanding of what consciousness is could help eliminate this possibility.

While Pollard is optimistic about using imaging of anesthesia to understand consciousness itself, Brown is more skeptical. He notes that it’s much easier to break something than it is to build it. In other words, knowing what’s being disconnected during unconsciousness might not illuminate much about what’s happening during consciousness. Either way, a better understanding of the circuits involved in unconsciousness has a lot to offer medicine."